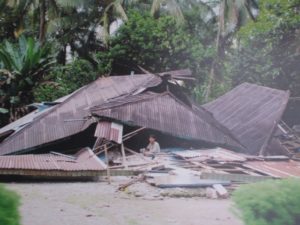 On Friday 28 September 2018, a 7.4 magnitude earthquake struck off Donggala Region, in the province of Central Sulawesi, Indonesia, causing extensive damage and triggering devastating mudflows and a tsunami. Over 1,200 people have been killed and more than 61,000 have been forced from their homes. Queues at petrol stations around Palu reportedly stretch for kilometres. Thousands of people have tried to flee via the city’s airport but only one flight a day is due to leave.

A three-person team of MapAction mapping volunteers in Indonesia at the the request of our partner the ASEAN Humanitarian Assistance Centre (AHA Centre) to help them coordinate the response. They will be ensuring that rescue and recovery workers have situation maps which are continually updated and reliable. We have also been providing remote support since the earthquake struck creating maps detailing essential information such as health and transport infrastructure. We’ve launched an appeal to fund this mission.