In this video, MapAction volunteer Emerson Tan gives a report from the airport on his way home from Guatemala.

MapAction was mobilised to help the international response to the catastrophic impacts of Hurricanes Eta and Iota which have caused tremendous suffering across Central America, on top of the COVID pandemic.

by Jon Hanson, Head of Grants Income at MapAtion

This StoryMap explains how some of the over 100 maps MapAction created following Hurricanes Eta and Iota in Central America in November 2020 are being used to help get aid to people that need it. Click here to view it in full screen.

A three-person MapAction team is today travelling to Guatemala following extreme flooding and catastrophic landslides in 12 of 22 of the country’s administrative departments caused by Hurricanes Eta and Iota. Ten departments have declared a state of emergency and the Guatemalan government has requested foreign assistance. Around one million Guatemalans are estimated to be directly affected and at least 53 people are known to have died.

The devastating storms have come on the back of social and economic hardship caused and exacerbated by COVID, unemployment and population displacement. The flooding has caused widespread destruction of crops and livestock and around 5,000 wells have been contaminated. There is a high risk of disease outbreak and many people are in urgent need of shelter.

The MapAction team, which is deploying at the request of the Office for Coordination of Humanitarian Affairs (OCHA), will be helping to gather and map information about the evolving situation on the ground, as well as the aid being provided by different agencies, so that gaps can be identified and addressed.

This mission brings the total number of MapAction personnel working with OCHA teams on the impacts of Eta and Iota in the Central American region to nine, with additional support from across our wider team. In addition to the Guatemalan team, a five-person MapAction team has been providing full remote emergency support to OCHA’s Regional Office for Latin America and the Caribbean (ROLAC) since 6 November and another team member has been seconded to ROLAC full time since September to assist with hurricane preparedness and other humanitarian issues across the region.

We’re grateful to the German Federal Foreign Office for supporting our response, as well as to the Netherlands Ministry of Foreign Affairs, the UK FCDO and Rotary clubs around the UK for their continued support of MapAction’s response capacity.

Countries in Central America are facing catastrophic winds and flooding as Hurricane Iota, a Category 5 storm, makes its way across Nicaragua, Honduras and El Salvador.

With wind gusts of up to 250km/hr and torrential rain, Iota made landfall in northeast Nicaragua last night. It is compounding the damage and devastation inflicted by Category 4 Hurricane Eta, which killed at least 178 people in the region a fortnight ago and destroyed food crops for thousands of families.

MapAction has been remotely providing full emergency support to the Latin American and Caribbean regional body of the UN’s Office for Coordination of Humanitarian Affairs (OCHA), known as ROLAC, since 6 November to assist the response to Eta and now Iota. This includes mapping storm tracks, flood extents, building damage, affected populations and information about what assistance humanitarian teams are already providing in different locations so that gaps can be identified and rapidly addressed. This work represents a scaling-up of the ongoing support to ROLAC we have been providing since September, in preparation for Hurricane season and other humanitarian issues across the region.

“Iota is hampering the response to Eta, severely degrading logistic routes and complicating the information picture,” said MapAction’s Operations Director Chris Davies. “Our maps are helping teams on the ground direct resources where they’re most needed, as safely as possible. We will continue to provide support to our ROLAC colleagues and are anticipating and preparing for additional requests for our assistance.”

We’re grateful to the German Federal Foreign Office for supporting our response, as well as to the Netherlands Ministry of Foreign Affairs and the UK FCDO for their continued support of MapAction’s response capacity.

While much of the world was focused on battling COVID-19 last week, a powerful tropical cyclone swept through the Solomon Islands, Vanuatu, Fiji, and Tonga, causing significant damage and loss of life.

With gusts over 170mph and rainfall of 250-450mm, Tropical Cyclone Harold was the worse storm to hit Vanuatu since Cyclone Pam in 2015, and, in some areas, damage has been significantly worse. Entire villages are reported to have been destroyed in the northern parts of the island chain.

In addition to the devastation caused by the storm, social distancing measures had to be temporarily lifted in some areas to enable people to gather in emergency shelters, and this may exacerbate the impacts of COVID-19 in the region. Furthermore, the crisis is largely remaining under the radar, given the ongoing pandemic, meaning little funding is being made available to assist the affected islands, despite tremendous need. What international aid there is has been hampered and delayed by the virus.

MapAction is already delivering support to the UN’s Office for the Coordination of Humanitarian Affairs (OCHA) in the Asia Pacific region (ROAP) to help the regional COVID-19 response. We have diverted some of this effort to respond to the emergency caused by Cyclone Harold, creating situation maps for Fiji and Tonga. These are helping humanitarian teams prioritise and coordinate aid. We will continue to provide assistance as needed.

Catastrophic weather events have affected millions of people around the world in recent weeks. So far this month we have seen six named tropical storms in the Atlantic and Pacific, including three hurricanes and two super typhoons – and storm season is still far from over.

At the same time as the southern US was battered by Hurricane Florence just under a fortnight ago, parts of the Philippines were devastated by Super Typhoon Mangkhut, known locally as Ompong, which also caused widespread damage in Hong Kong and southeast China. 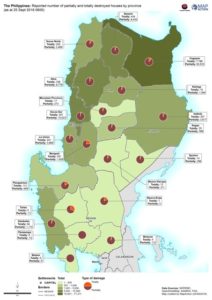 Mangkhut has affected over 2.1 million people in the Philippines, which is still recovering from the devastation of Typhoon Haiyan in 2013 in which over 6,000 people died. The latest death toll has reached 127, with almost the same number still missing, compared to four dead in China. More than 10,000 houses in the Philippines were completely destroyed by Mangkhut and over 100,000 others damaged. More than 50,000 people are in immediate need of assistance and, with damage to agriculture estimated at over £378 million, livelihoods and food security are of concern in the medium-term.

A MapAction member has been in Jakarta, working with emergency response teams at the head quarters of the AHA Centre (the Coordinating Centre for Humanitarian Assistance on disaster management for the Association of Southeast Asian Nations) as it responds to the emergency. Our latest maps show some of the impacts Mangkhut has had in the Philippines as well as the assistance currently being provided. We are continuing to provide mapping and information management support to support the recovery process.

Storms Isaac, Florence, Joyce and Helene are currently passing across the Caribbean region and Southern USA and we are monitoring and mapping their progress together with forecasts of likely wind speeds, storm surges, flood risks and other hazards. Isaac is due to pass over Dominica, Guadeloupe, Antigua and Barbuda today, bringing very high winds and heavy rain. Currently it looks as if Dominica is at greatest risk of flooding.

MapAction member Jonny Douch is in Barbados where he is providing support to the Caribbean Disaster Emergency Management Agency (CDEMA) which is headquartered there. Jonny has been in the region for the past three weeks, delivering mapping training to members of the teams that make up CDEMA’s Regional Response Mechanism and supporting the UN Disaster Assessment Coordination (UNDAC) with preparedness activities in St Maarten. He has stayed on in Barbados to help with the storm response. We also have a small team of trained Disaster GIS Volunteers who live in the region and other team members are on standby to help as needed.

MapAction has significant recent experience and strong working relationships in the Caribbean, having provided GIS teams and other assistance in response to several hurricanes and the Haiti earthquake, as well as training and preparedness activities. Ronald Jackson, Executive Director of CDEMA, said this week, “We had the opportunity to work closely with members of the MapAction team during the response to Hurricanes Matthew in 2016 and again during Irma and Maria in September 2017, and from this collaboration, we understood the benefits that their mapping and information management expertise could bring to our own operations.”

We hope that damage caused by this week’s storms is not as severe as that caused by Hurricanes Irma and Maria a year ago, but we are keen to support responders in the region in any way we can.

In addition to the Caribbean storms, we are monitoring Super Typhoon Mangkhut which has the potential to affect 43 million people in the Philippines.