December 18 marks The United Nations (UN) International Migrants Day, recognising the efforts, contributions, and rights of migrants worldwide.  In light of this, we decided to share some of the work we did this year during the Syria crisis to highlight some of the challenges of meeting the needs of migrant populations, and also explore the role that maps can play when people are displaced from their homes.

MapAction was asked by the UN’s Office for the Coordination of Humanitarian Affairs (UN OCHA) to send a team to Turkey. Their mission: to help humanitarian teams there and in Northwest Syria supporting almost one million people – 60% of them children – that arrived in the region during January-March 2020, following an upsurge of fighting in Aleppo.

A population displacement of this scale and speed results in great vulnerability for those involved, as well as many unknowns for humanitarians about people’s access to essential things like food, water, sanitation and shelter. And that’s before you factor in the added complication of COVID.

Camps vary enormously, from just a few tents to the size of a small city, and from temporary to long-term settlements. Some are isolated, while others are grouped together. Getting clean, up-to-date data about them is essential for the Clusters to coordinate life-saving aid.

MapAction’s aim was to grant the Cluster coordinators a ‘single source of truth’ about the locations and sizes of the camps, to enable them to understand their population density and meet the needs of the people arriving and living in them. The imminent threat of COVID-19 made this even more urgent and important – not to mention more difficult.

‘Data cleaning’ is a vital part of the process. Camp data is often captured by collectors with varying levels of training, network connectivity and other obstacles. Sometimes geographical coordinates are estimated from a central location instead of using GPS, or transcribed manually, introducing human errors. The same data might be captured several times by different organisations, with different results. All of this can make it difficult to pinpoint the exact locations of camps and could cause them to be missed or double counted, resulting in delays or complete omissions in aid delivery.

Camps vary enormously, from just a few tents to the size of a small city, and from temporary to long-term settlements. Some are isolated, while others are grouped together. Getting clean, up-to-date data about them is essential for the Clusters to coordinate life-saving aid.

The MapAction team compared a core list of 700 sites against a further list of 600 camps, and used GIS analysis to deduplicate against location, site name and then visually against the latest satellite imagery, to confirm locations. Over three iterations, they were able to support the CCCM Cluster to improve the core list from 700 to around 1,000 sites.

To aid this process in Syria, our team created two data tools. One helped to identify anomalies in the camp location coordinates. The other automatically performed location analysis, determining in which Administrative District each camp was situated. As a result of creating these tools,  they were able to save 60-70% of the time it took to manually clean and assess camp location data – around half to one day of a Cluster team member’s time, once or twice a week – freeing them up for higher value tasks. They also enabled faster identification of unrecorded camps, speeding up the delivery of aid to people in need.

Next they drew polygons of the camps, mapping their size and extent. This major task, involving creating digital maps of most of Northwest Syria using OpenStreetMap imagery, gave context to the coordinates. It hadn’t been done before and was described by the Clusters as “fantastically helpful”.

The above describes the outputs of one MapAction mission in support of displaced people. To support the various aid agencies we work with, we also publish resources about the types of maps that can be helpful in different humanitarian situations, and information about their use.

These resources include: core maps; maps to help with work in humanitarian clusters, and specifically, where there is vulnerability or access problems during a response (e.g. food, shelter, water and sanitation, etc.); and maps that are produced in response to a particular hazard such as armed conflict.

In the case of migration, population maps, including baseline population, languages and population displacement maps, are often the most relevant. These maps may be produced in response to extensive population displacements driven by natural disasters, political unrest or a complex emergency situation. They are both strategic and operational in nature and can help all responders coordinate camps and aid response planning, including effective communication with affected people.

When it comes to migration, there are some things to bear in mind when mapping. For example, where migration is because of political persecution or war, recording camp boundaries and tagging them on a widely available map could pose a serious security risk. In these instances, it is common for some camp locations not to be shared.

Thought should also be given to the most effective way to depict on maps the movement of groups who may go through different phases of displacement. In these cases, infographic methods of sharing the data may be more suitable than maps, showing summary information and key issues without publishing sensitive locational data.

Cluster maps are used in conjunction with core maps and can specifically show where there is a particular or probable vulnerability or access problem during a response, e.g food, shelter, hygiene facilities. Within this, the camp coordination or camp management cluster helps inform planning and operation of camps. They may show camp population figures, infrastructure, hazards or resources. Planning of camp locations is driven by many spatial factors including safety and access to resources.

According to the UN Office for the Commissioner on Human Rights, an estimated 258 million people, approximately 3% of the world’s population, currently live outside their country of origin, with an increasing number being forced to migrate due to a complex mix of issues including poverty, water, food and housing. We will continue to seek and develop ever more effective mapping and geospatial data tools to support our partners who are working tirelessly to help people caught up in any situations that cause them to leave their homes.

Since October, MapAction has been working in Guyana with the Civil Defence Commission and Unicef to support Venezuelan and Guyanese communities affected by the Venezuelan economic crisis. This work has now been extended until 2019.

Large numbers of people have left Venezuela as a result of economic hardship, and many of them are in Guyana. Registering incoming Venezuelans and understanding which communities are in need of support to host them continues to be vitally important.

MapAction has been helping Unicef to analyse how effective the response to the economic crisis in Venezuela has been, in particular bringing the situation for children into focus. Our work with the Guyana Civil Defence Commission involves assisting a move from a paper-based to a digital information management system. Both partners are keen to extend this work through the end of this year and beyond.

We’re very grateful to the Calleva Foundation for supporting this important work.

Over the next two months we will be working in Guyana with UNICEF and the Civil Defence Commission of Guyana to help them with mapping and data management to meet the needs of people arriving from Venezuela and the Guyanese communities hosting them. A two-person MapAction team is currently in the Guyanese capital Georgetown.

More than two million people have fled the economic crisis in Venezuela since 2014 due to shortages of food, medicines and basic goods. The influx of people into Guyana is starting to put pressure on host communities. Our work with UNICEF will focus on bringing the situation for children into focus for responders in Guyana. We are also supporting the Civil Defence Commission to digitise information management processes and to use data to identify which communities are in need of support.

Around 1.4 million refugees are currently living in 30 settlements in Uganda. Many of them have fled conflict or abuse in South Sudan, the Democratic Republic of Congo (DRC) and Burundi. 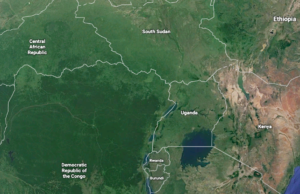 For several months, MapAction has been working with humanitarian research project REACH and other humanitarian organisations in Uganda to help understand the needs of this large and diverse population of displaced people so that they get the help they need.

In April this year, a MapAction team went to Uganda to explore the information needs of humanitarian teams operating in the region and how we could help. This followed an upsurge in conflict in eastern DRC, which caused a large number of people to flee to Uganda. Since then, MapAction has undertaken three further missions to Uganda to support a large-scale assessment of the needs of refugees lead by REACH, and to deliver a humanitarian mapping course. 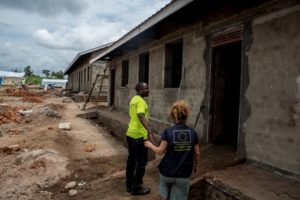 We are very grateful to MapAction members Jonny, Jorge, Katharina, Anne, Alistair and Becky for their hard work helping ensure that the needs of refugees in Uganda can be met. We are also grateful to the European Civil Protection and Humanitarian Aid Operations (EU ECHO) which is funding this work through a two-year grant aimed at strengthening effective, evidence based humanitarian decision-making.

It is likely that MapAction will continue to be involved in leading training sessions and advising on the development of regional information systems in Uganda this Autumn – so watch this space for more news of that work as it unfolds. 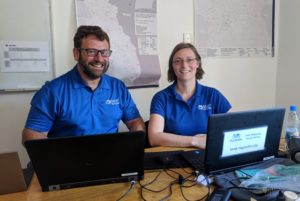 A two-person MapAction team flew to Kampala, Uganda last week to provide mapping and information management support to humanitarian teams responding to a major refugee crisis in the region. This follows a recent upsurge in conflict in the eastern part of the Democratic Republic of Congo (DRC), causing significant displacement of people into Uganda, a country that is already contending with a large influx of refugees from South Sudan. Around 1.9 million people have fled DRC since the start of 2017, with 242,000 being hosted in Uganda. The United Nations Office for the Coordination of Humanitarian Affairs (UN OCHA) estimates that 13.1 million people are in humanitarian need within DRC.

This latest MapAction deployment follows an earlier scoping mission undertaken by a two-person MapAction team during April this year to assess needs and how MapAction can help. MapAction offered support to in-country teams with analysing and reporting of gathered information to understand the needs of displaced communities. MapAction’s work is being funded by a two-year grant from European Civil Protection and Humanitarian Aid Operations (EU ECHO) aimed at strengthening effective, evidence based humanitarian decision-making. We will continue to provide support both in-country and remotely for around two months.